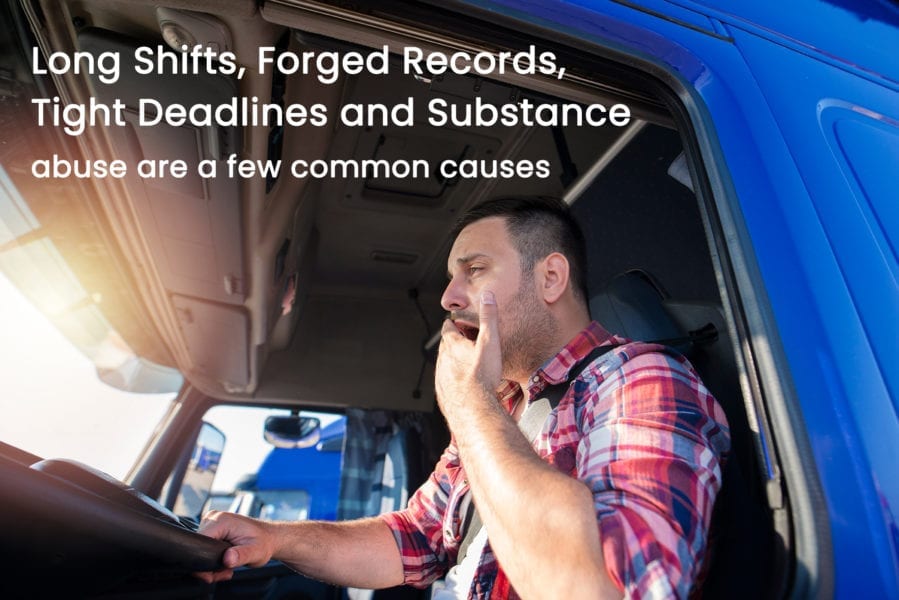 Driver fatigue among the most common causes of commercial trucking accidents

Truck drivers are frequently required to be on the road for long hours with little rest within relatively short amounts of time. As such, it is no surprise that driver fatigue is among the most common causes of commercial trucking accidents.

While there are federal regulations in place governing how many hours truck drivers can be on the road consecutively or within given periods of time, driver fatigue is still frequently a factor in accidents due to mismanagement or negligence in hour tracking, or simply due to the challenging nature of the job.

Here’s an overview of what you should know about driver fatigue in trucking accidents and what to do if you’ve been injured in an accident caused by driver fatigue.

According to the CDC, approximately one in 25 of all general population drivers has fallen asleep on the road. The risk is higher for commercial drivers, who are more likely to be on the road for long stretches of time, including night shifts, and who spend more driving time on highways, which may lull drivers into a trance when there is not much traffic.

If you and your legal team have filed a personal injury claim against a trucker or trucking company due to an accident caused by a fatigued driver, you will need to be able to point to factors that indicate the driver was fatigued. Here are just a few of the most common causes of fatigue for truck drivers.

For more information about the steps to take in a personal injury claim arising out of accidents caused by truck driver fatigue, contact the experienced accident lawyers at Bond Legal today.