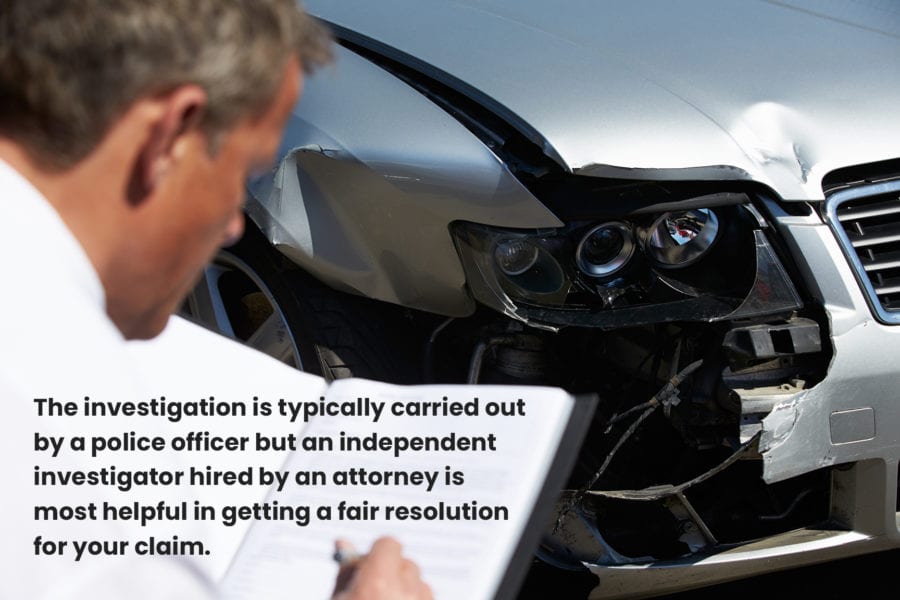 Oftentimes, it can be difficult to get the compensation you deserve after being injured in a car accident. Insurance companies may drag along the process and explore myriad ways to dispute your claim. Personal injury attorneys may choose to rely heavily on a forensic investigation to ensure victims receive the compensation their clients are entitled to after an accident.

A forensic investigation can determine which party is ultimately at fault, if comparative liability is to be assigned, or if a third party is responsible for a malfunction or mechanical error.

The investigation is typically carried out by a police officer but an independent investigator hired by an attorney is most helpful in getting a fair resolution for your claim. Investigations may include an examination of the vehicles involved and photographs from the scene of the accident. The results of the investigation process play a key role in trial proceedings.

Although the end result of a forensic investigation is the determination of fault in an accident, the goal of forensic examiners is to analyze various data points to understand exactly what happened in a car crash and why. A variety of techniques, measurements, and formulas may be used to develop likely crash scenarios.

On average, nearly 36,000 car accidents occur in the U.S. each year, according to the Insurance Institute for Highway Safety (IIHS). Alcohol, speeding, lack of safety belt use, and other problematic behaviors contribute to the estimated 40,000 deaths each year that result from such accidents.

The first step in the forensic investigation process is to review the damage to the vehicles involved in an accident. Investigators will assess the positions of dents and scratches to determine the points of impact and possible trajectories of the vehicles. Next, the investigators will inspect the crash site for any factors that could have potentially caused the crash such as ice, water, or other road conditions. Once the crash site has been inspected, investigators will evaluate skid, or tire, marks to better understand the path, speeds, and braking patterns of the involved vehicles. Skid marks may be the key to identifying and determining fault in an accident.

After the vehicles have been assessed and removed from the site of the accident, investigators will look at the position of debris on the road, which can indicate the position of the vehicles in the crash. Using all of the data and insight gleaned from the previous steps in the investigative process, a car crash reconstruction may take place, using physics and math equations to calculate speed, distance, reaction time, and force of the collision, and ultimately determine fault.

While eyewitness accounts of an accident can be unreliable, data collected through a forensic investigation can serve as compelling objective evidence about what happened during a crash and why. At Bond Legal, you can rest easy knowing you we have a team of experienced attorneys who put the needs of victims first and seek justice for their losses. We know that damage from an auto accident can go beyond the actual out-of-pocket costs. Our attorneys and team of investigators can help you recoup compensation for expenses for your vehicle repair, medical bills, lost wages, and psychological trauma.